March is the Growing Season in the San Francisco Bay Area Mediterranean-type microclimates. The deciduous trees are usually mostly beyond bud burst, and the little leaves are now dependent on the roots that would most likely be cut off, damaged or dried out at their all-important tips if we tried to repot them now. So keep on repotting but only evergreen broadleafs, then conifers, then junipers.The experts will tell you that there are plenty of exceptions, but you better be an expert if you’re going to try to make them. 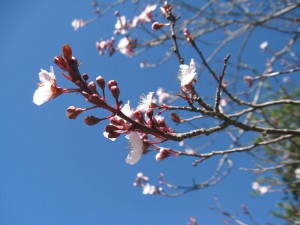 Fertilizing is a Springtime question, isn’t it? Here’s the scoop: In most cases, for young or youngish trees fertilizer of any kind before the first flush of new growth emerges and begins to harden off means faster growth and longer internodes. That’s okay for nursery stock, or trees that just need wild growth for thickness in branches or trunk, but for trees that are on a refinement track it’s ruinous. Please don’t forget that a thirty year old maple or a sixty year old pine are youngish trees in the grand scheme of things, and few of the trees that most of us deal with most of the time are well developed, nearly finished bonsai, even though they may be graceful, beautiful, presentable trees worthy of some display. Some of the average bonsai artist’s trees or even most of our trees are on a refinement track, which means for the most part we want to arrange for moderate growth at a steady pace that we can deal with. That’s why very low or non-nitrogen fertilizers are used in the winter by some growers, to avoid uncontrollable growth during the uncontrollable Spring.

Fertilizing is best done when the rampant Spring growth begins to slow down, harden off, and settle into the slower, heavier and more predictable growth of Summer. That’s true even of repotted trees. Don’t believe it? Repot any young healthy deciduous tree with good technique in good bonsai soil and wait for May or June to fertilize. If there’s no disease or pest to interfere, the tree will be leafy and strong and healthy. The experts will tell you that there are exceptions to this advice about fertilizing, plenty of them. But you should become one or carefully consult one before you decide what to do about each of your trees. Feeding periods in late Spring, late Summer, and early to mid Autumn are the norm in many professional bonsai gardens and most orchards everywhere. Some bonsai artists use Miracle-Gro all the time. Go figure. 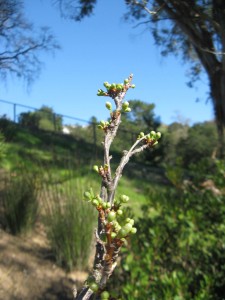 Organic, slower-releasing fertilizers promote disease and drought and pest resistance to some degree, while making the soil into a living ecosystem that tends to support life. Just like nature, like out in the woods. You see? Chemical fertilizers are likely to do the opposite for the soils and ecosystems in the bonsai pots. They are formulated to produce brief, frantic maximum production of food crops that are so poor in their resistance and strength that it seems necessary to genetically modify them to resist the poisons and foliar chemicals that must be sprayed on them. This is a cycle that self perpetuates until the soils are largely sterile and the cycle gets worse. Nature has a different, slower more patient way that is healthier.

As to method of application, all kinds of things work. Some like to put a tablespoon or two of whatever fertilizer they choose into a disposable tea bag so that a little is released with each watering during parts of the year on some but not all trees. Some like to stir a tablespoon or so into the soil of the periphery of the pot and let it work. Some use Miracle-Gro but only as a foliar feed occasionally, and some of that probably gets into the soil, right? No harm in that. the point is that some trees can use lots of fertilizer and some really shouldn’t and there is no rule of feeding that will take the place of learning the basics of why and when and how much for each tree in its current state of development and condition. Amen. 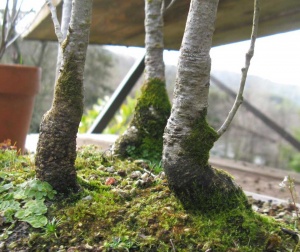 To get rid of wet green moss growing on (and rotting) the trunks and exposed roots of trees in pots, spray the moss with a light to medium spray of rubbing alcohol a couple of times over a few days and avoid getting water on it when watering. When it dries up and dies, brush it off gently but persistently with a denture brush from the drug store. Otherwise, the wet fragile bark will be damaged or removed and may take years to grow back.

Spring is the big work time, a regular beast of demands on the bonsai artist. Gird up for battle and get out there. Go to the meetings of the clubs and learn some stuff. Go to the auctions and sales and shows and feel your heart begin to beat in harmony with the cycle of life that all our ancient ancestors knew and loved and marveled at.