Spring gets us every time, doesn’t it? Just when you think you’d better get out there and finally repot that tree you’ve had your eye on, the dang thing has leaves already! Can you still repot it anyway? Well, the answer is complicated. If it really doesn’t drain well and you feel that its necessary in order to save the tree, then you can do a lift and plop. Get a bigger pot, prepare it as usual with a drainage layer and wires and a fresh soil layer and all, then pull the tree out of its old pot, rake all the old soil from the surface half inch or so, pick and pluck at the roots to loosen them some but don’t cut any, and plop it in the new pot, wire it just hand-tight in place, and fill in all around with new soil. Gently chop the new soil into the root ball perimeter and surface. If the surface is too dense, get a square-shafted barbecue skewer (narrower, smoother, and stronger than a chopstick, for better penetration and less root damage), and spear it through the root ball in lots of places to conduct water and especially air down into the roots. There may be an element of luck, but if careful this should make the tree healthy until the next Fall or spring repot comes up. Don’t forget next time. These work-arounds are things we all need to know, just in case. If you’re shaky on this find someone who has done it successfully and get them to help you through it. That’s one of the great things about the bonsai clubs. We all teach each other all the time. 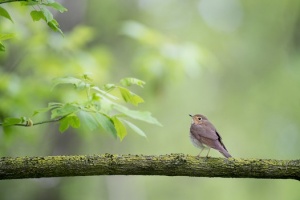 Here in the Northern California Bay Area microclimates, if it doesn’t rain, then the days get more late Springish even though the nights stay consistent with earlier Spring. This makes the trees go ahead and push into flower and into leaf sooner than one might expect, and suddenly, too. Don’t let this fool you into watering more than is needed. The trees are using more water to grow, but the evaporation is lagging behind so you have to be careful not to create soggy soil. You still have to scratch the soil with a chopstick and wait to water until it’s pretty dry one half to three-fourths inch deep. Newly repotted trees are in soil that drains better, is better aerated, and dries faster than older repots, so they generally have to be watched and scratched and watered a little more than the others. It’s helpful to group the faster, drier ones together so they can be observed and watered as a group without having to think about it too much.

Wiring can be done now, but not on growth that is too new and green. it will be too fragile and brittle. This growth will harden off by Summer and will still be flexible, much easier to wire than now. Any wire put on in Fall or Winter must be checked frequently for cutting in, because if the trees are as vigorous as hoped, branches and trunks will get fatter quickly and may be scarred before you know it. Some scarring may take years to to correct. Some may never be correctable. Watch closely.

Watch closely for bugs, scale, fungus and other blights as well. Aphids, mites, leaf and bark-eating worms, and some other things can simply be squirted off. Just get one of those hose-end wands that adjusts to many patterns and select a flat spray, the regulate to the hardest spray that won’t damage the foliage, and spray hard from all directions including from underneath every few days or so. It’s quick and easy and healthy for the trees. For black, red, and the tiny white scale, all of which suck the plants and especially the new growth to death, horticultural oils in a lighter growing-season dilution can be the most effective control, killing adult, larval and egg forms. Just make sure that all tree surfaces get thoroughly sprayed, do it early in the morning, and don’t water from overhead for a day. Cover the soil so oil doesn’t get into the root zone. These measures are the more natural ones that tend to get rid of the problems but preserve the ecology of helpful insects and soil fungus that promote health and resistance to disease and drought.

Fertilizing is often done in the Mediterranean-type climates year-round, using organics with N-P-K numbers below ten. Some growers use 0-10-10 types until Summer begins, to try to control those long internodes that will just have to be cut back eventually anyway. Some young trees that are just being fattened up in their trunks and branches are fed much higher N-P-K numbers and allowed to grow out and do whatever they want until they get to be the right size. But they all need feeding during the rapid growth of Spring.

Plenty to do. Go out and do it. Plenty to think about. Go on and think it. Lots of life to live, make sure that you actively live it every day. Life may seem to go slowly sometimes, the hours can drag and the days may seem endless and exhausting. But the years? They’re gone by like a bullet, my friend. Think back: They’re just gone, just like that. Better find some peace in your heart, some deeper levels of communion with your friends, and make sure all the people you love know that you love them as often as you can.