The month of July in the Northern California Bay Area microclimates is a jumble of changeable conditions and temperatures that can go from baking hot to crisply chilly in as little as a day. This poses some problems for the bonsai artist, most notably with watering. If the temperatures go much above 85° or so, the trees slow down all life processes to avoid water loss. This can cause the soil to remain surprisingly moist down in the pot, even though the surface gets toasted. A few days like that and if you’re not careful there will be roots staying too wet and too warm for too long, and that’s when friendly microbes die and fungi thrive. Add a little fertilizer, especially the chemical types, and the resulting soup can spell dead tree. Be careful in really hot weather to scratch down into the soil of each pot to be sure how much to add. During a very hot spell, move small pots to areas of less hours of sun, or even a few days of shade. Put cascades in a water bath for a few hours or a day every ten days or so through September. Put wisteria and tamarisk in a water dish about a third to a half as deep as the pot they’re in until November or so, and water pomegranate well to encourage fruit set. July and August are usually said to be times when fertilizer is not necessary, as growth processes are necessarily slow in hot Summer weather. Many growers use low yield, slow release fertilizers all year round in our area with success. It’s the big-boost and chemical products that are likely to cause rapid weak growth that is easily burned by sun and wind. 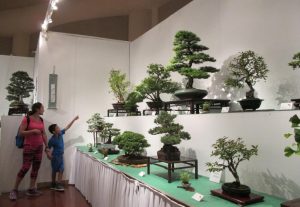 July is a good time to check on wiring done earlier and to replace wires that are too tight before they damage the bark significantly. When rewiring, try to follow a new path of untouched bark with the new wire, or even wire in the opposite direction to avoid repeat pressure on any spot. Cutting large leaves off as they appear to let light and air into the tree is a good practice, but defoliating is dangerous in hot weather.

Leaf-eating, leaf-curling, and sucking bugs and caterpillars are active in hot weather, as are the molds and mildews. Spray for them early in the mornings and shake off the excess so they can mostly dry before the sun comes to burn the leaves. The same goes for the half strength or growing-season dilutions of horticultural oil used as a suffocant for scale. Try to find horticultural oils that are closest to 98% inert oil with no sulfur or other ingredients which can cause burning. Bugs tend to begin to tolerate the sprays after repeated applications, so switch around with different types and brands and remember that lots of critters can be sprayed off with a good hard water stream or discouraged with safer-soap type sprays.

If you see active wilt on any tree, soak it in a waterbath up to the rim of the pot for two or three hours, then put the tree in bright shade for two or three weeks and be careful not to overwater. Sometimes a tree that showed wilt can bounce right back, but some lose fruit, flowers and buds, even twigs or branches.

These are beautiful days in the bonsai garden. Beautiful nights too. Sometimes beautiful thoughts and feelings are waiting there. Be sure to commune with your carefully tended bits of nature after dark now and then for a new perspective. Sears now sells a ball cap made by Craftsman with two bright led lights mounted at a downward angle well back underneath the edge of the brim that will reveal some intimate details that you’re likely to miss in the light of day or with a tool in your hand. Be sure look for peace but prepare for trouble. Be sure to look for mistakes but expect perfection. Try to keep dreaming your best dreams but keep your eyes wide open. Try to keep expecting love to lighten your heart often, and try not to accept anything less.