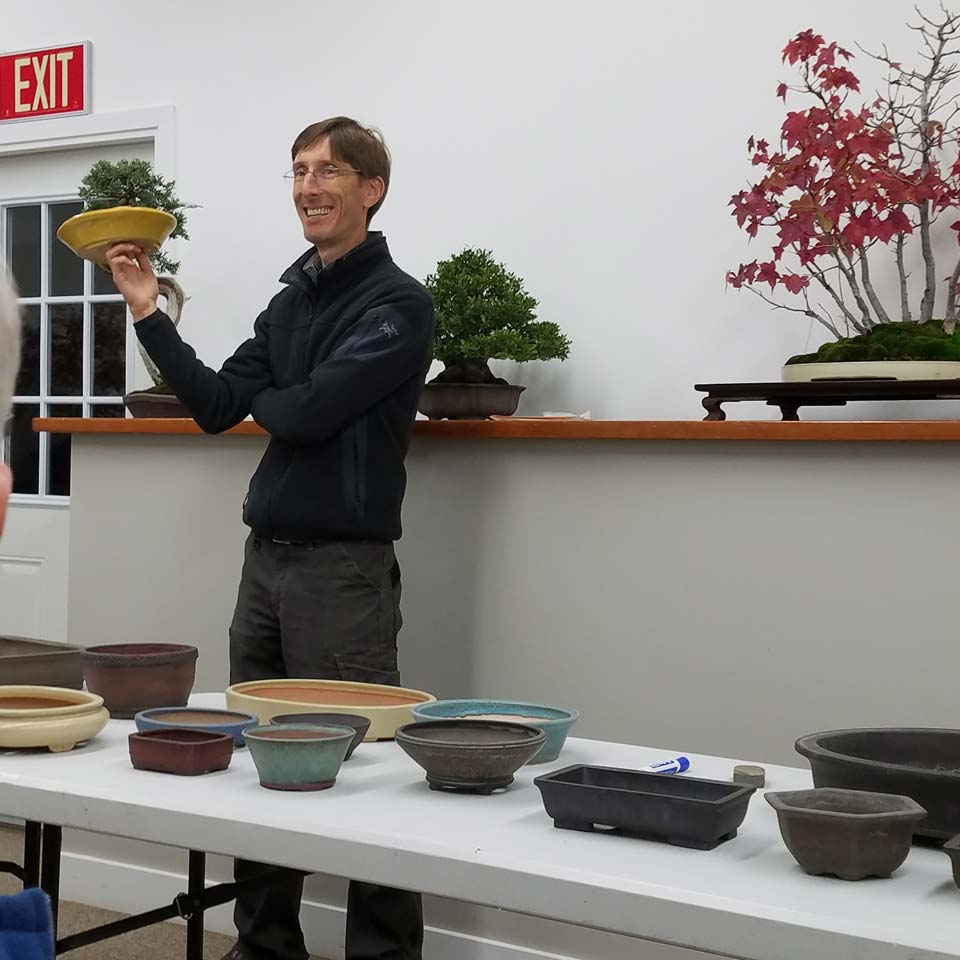 Jonas Dupuich joined us in November to help us better understand bonsai pots and the how-and-why of their importance to our trees. Echoing the last hour of our latest presentation from Peter Tea, Jonas started by pointing out that matching a pot to a tree alone is a huge topic, with a lot of variables to consider, and promised additional tidbits of information to round out the talk. For instance, it is important to know that the pots you see trees in at shows are most often different from the day-to-day pots for those trees. This is especially true in Japan, where the best shows occur during the winter, when transferring a dormant tree from one pot to another and then back again is no big deal.

In his signature engaging style, Jonas started asking the audience for their opinions regarding the important points when matching a tree to a pot well before he distributed his very informative summary page for the talk, which had all of the most popular answers on it. The important pot-choosing points named by the audience were glazed versus unglazed, oval versus rectangular, considerations of origins and styles, and keeping up with standards and trends, among others. 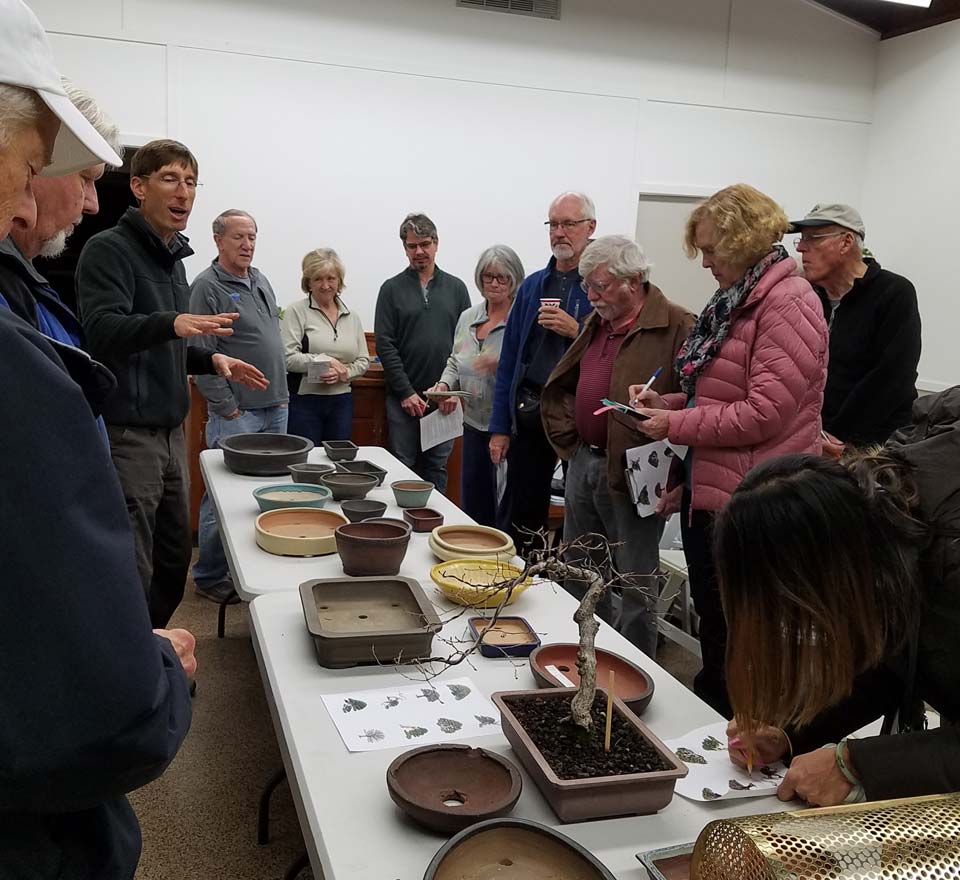 Jonas’ handout, which loosely served as an outline for his talk, had the following five major topics, with three to five points under each topic: “Bonsai pot basics,” “Some conventions,” “Match the container to the stage of development,” “Consider pot alternatives,” and “Preparing pots for exhibits.” If you were not there to get a copy of the handout, try asking an active member for a copy. I’m sure somebody can scan it and send it to you.

Jonas said that he doesn’t like to use mathematical formulas or precise geometric relationships to determine the appropriate pot size or proportion for a tree. Chris Ross mentioned the Golden Mean approach as an example of such, which if you look it up you’ll see is no joke. It also looks as though the Fibonacci sequence has been used to describe perfect branch ramification. In any case, Jonas is of the mind that knowing a few basic “rules” and simply looking at what has been done with trees that are considered good examples will improve anybody’s understanding of the aesthetics behind matching pots to trees without over-complicating the process.

Notice the quotation marks around “rules” above. That is because Jonas also doesn’t like to insist that everyone follow the rules. If you like it, he always says, you should go for it. That being said, there are certain combinations that are tried and true. For instance, it is fairly common knowledge that deciduous trees work best in glazed pots, conifers in unglazed, but what about evergreens? or azaleas? Both can be in either, but evergreens tend to end up in glazed pots, especially ones with nice patina. When it comes to choosing between things like oval versus rectangle, the trunk of the tree is often the most relevant feature. The more curvaceous the trunk, the more likely an oval is to look better than a rectangle. 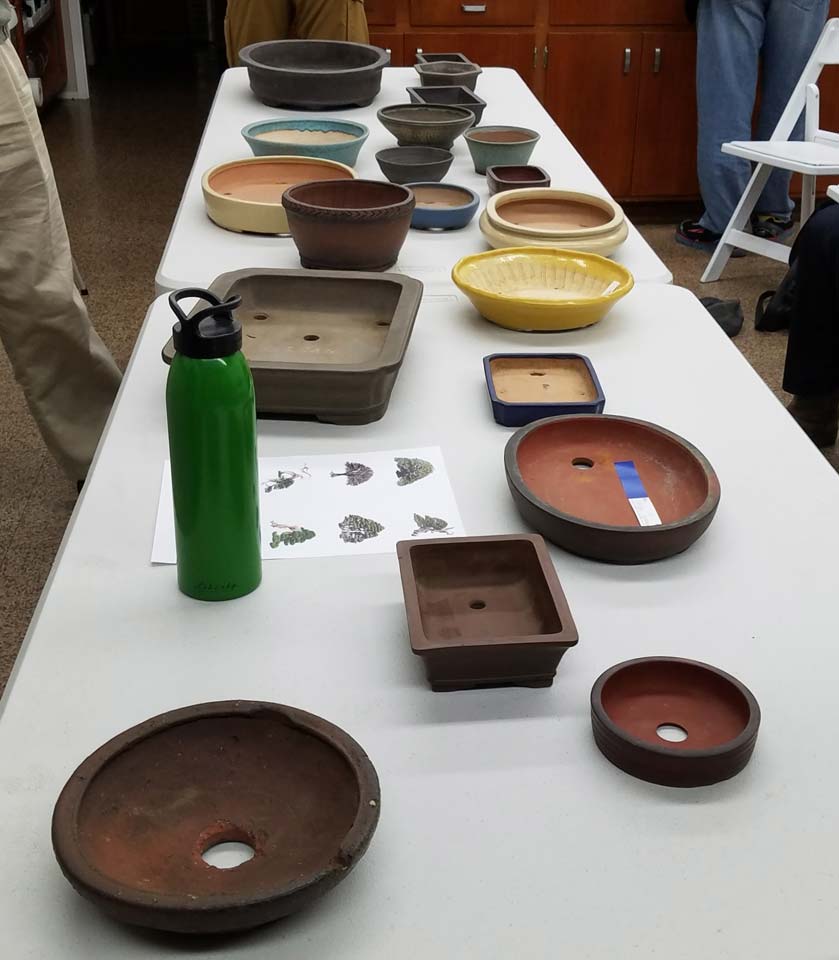 Toward the end of his talk, Jonas referred to the sequence of pot types he had slowly been building on the tables in front of him. These proceeded from pots appropriate for starting bonsai, such as plain plastic nursery containers and colanders, through pots good for early development such as mica containers and terra cotta pots, then to basic Chinese or mass-produced ceramic bonsai-style pots for bonsai undergoing branch refinement. Then came the newer nice Japanese pots for trees that are well developed, followed by older, rare, and antique pots for exhibition. 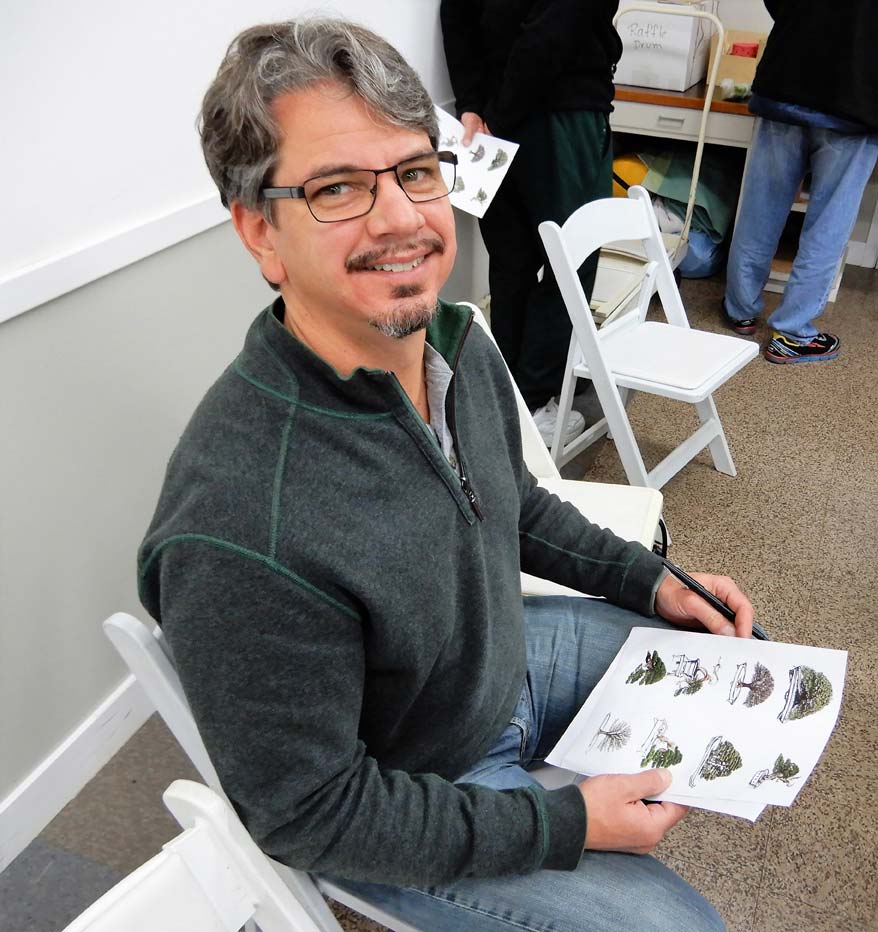 At the end of the presentation, the audience took and discussed a draw-the-right-pot quiz Jonas had printed on the back sides of the handouts, and then one of our newest members, Cheryl Beauvais won a pot that Jonas brought for us to raffle off. 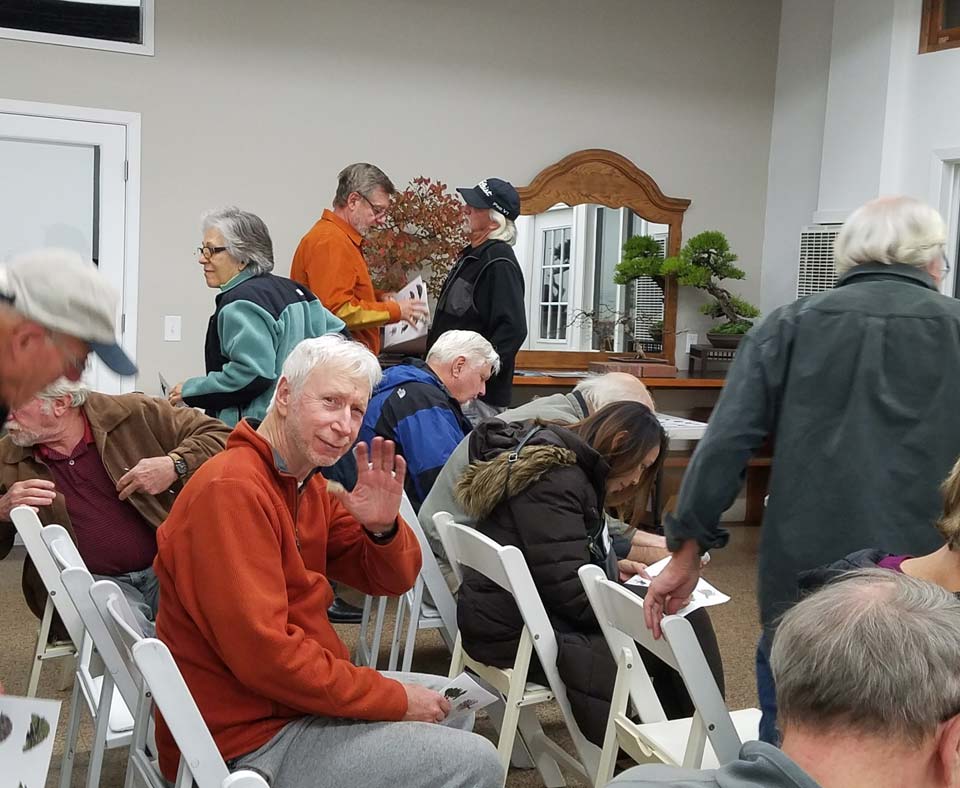 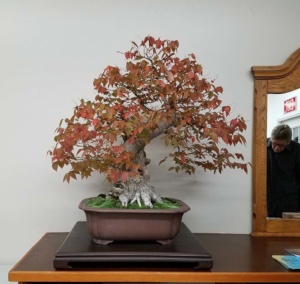 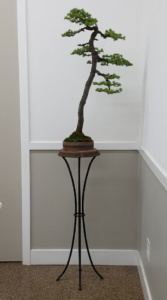 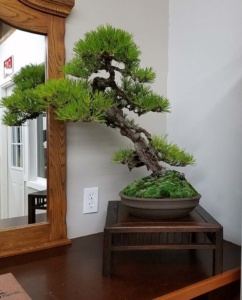 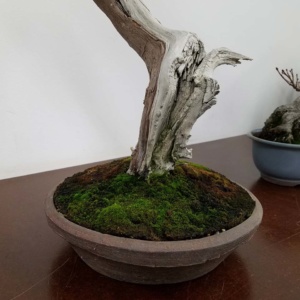