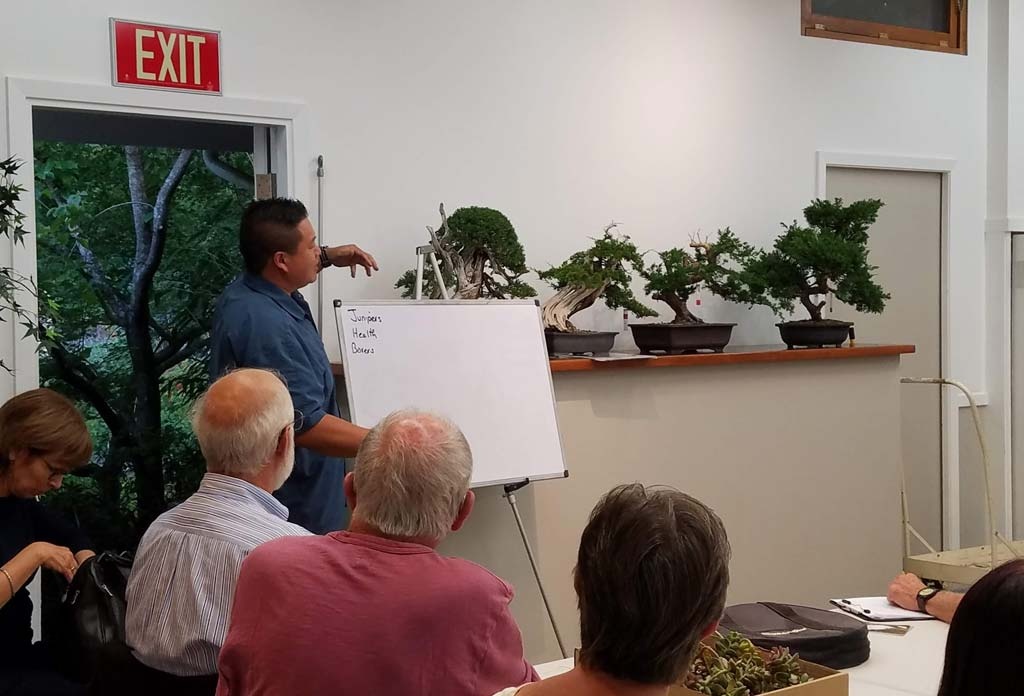 Peter Tea returned to the Marin Bonsai Club for our August meeting with his ongoing program on developing junipers for bonsai. He brought several trees to illustrate his talk, some he had worked on previously with the club, so we could see the progress the trees have made.

Peter started out with a review of the trees, pointing out the differences between the Itoyagawa variety which has lighter, finer foliage and is a little more difficult to work on, and Kishu, which is identified by darker and more dense foliage. Examining the trees that had been worked on previously with the club we saw that the trees exhibited strong growth and buds developing at the base of branches enabling Peter to make some judicious cuts. He cautioned us not to over prune the trees. Generally junipers are worked on twice a year, in June and December. The months of June and July will generally show the strongest growth, and if the tree responds well to pruning at this time and grows back strongly, it can then be pruned again at the end of the year. The top might even need to be cut more frequently, but there will also be areas that we won’t want to cut at all. The temptation to cut ugly or overly exuberant growth is strong, but these branches serve a purpose for a period of time in that they may generate new growth in an area that currently has none.

Peter turned our attention to the trunk movement on the trees he brought. This is always the first consideration when developing a tree because it takes so long to grow a good trunk. Once you have a trunk shape, taper, and movement you like, growing the branches is relatively easy. Peter cut about 3/4 of the foliage from one tree and jinned some lower branches. He illustrated the jinning technique; cutting around the area to be jinned so when stripping the bark more isn’t taken than intended, crunching the branch with pliers to make the bark release from the wood, then stripping the bark from the branch. At this point it can either be left for the future to do more shaping of the jin, wired to a new shape, or pliers can be used to strip off additional wood in fine strips – sometimes called thread carving – to create a more natural look.

The creation of shari was also discussed. This is where bark is carved away on the trunk of the tree which can add a sense of movement, and as it heals the scar lends an aspect of age and drama that we look for in the best bonsai. 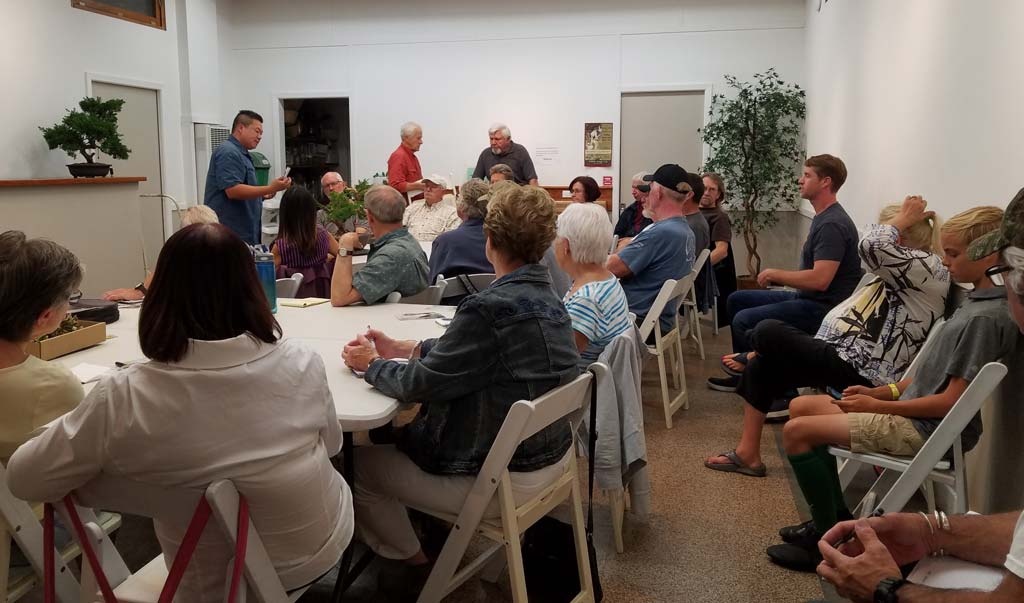 And speaking of adversity . . . Peter also discussed common pests that can infest our junipers and the need for them to be identified and killed off as soon as they attack the tree. Flathead borers are a common problem. They start as beetles, but it is the larvae which eat away at the insides of branches and trunks that do the damage. Once borers are identified, Merit .5G will poison the worm in the tree. This should be applied monthly to the soil surface, one application will not suffice, but not more than 3-4 times per season.

Bayer Rose food, or any other treatment with acephate as an active ingredient will keep spider mites from infesting our trees. Use it on all junipers, applying every 2 months during the growing season. 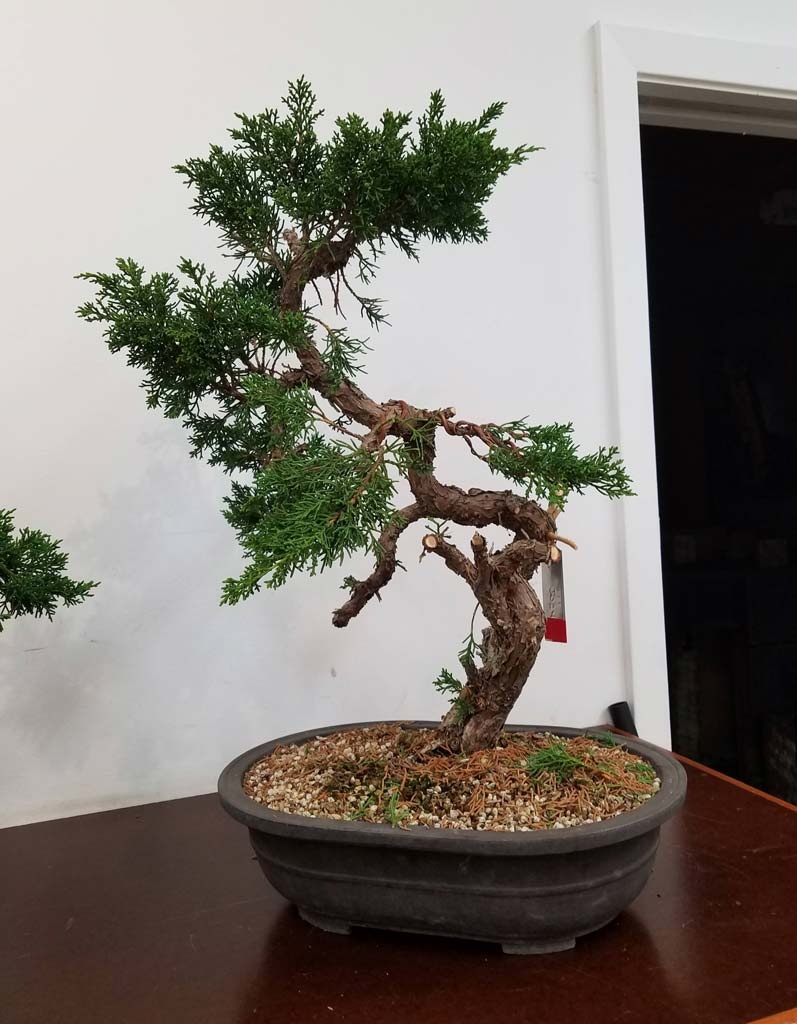 The back has something going for it too!

Before wiring the tree Peter did a little cleaning out of the branches. He cut weak, dead, and unproductive branches, but was careful to leave buds and small branches that might be of use later in the tree’s development, including some in the ’crotch’ area where branches meet. Wiring was quick and efficient for Peter, using copper wire to position the branches in the growth direction he preferred, and he didn’t worry about wiring much of the tips of branches, only enough to lift them slightly to encourage strong growth. And with that we thanked him once again for a highly informative presentation and rushed home to work on our own junipers before the memory of his presentation faded. 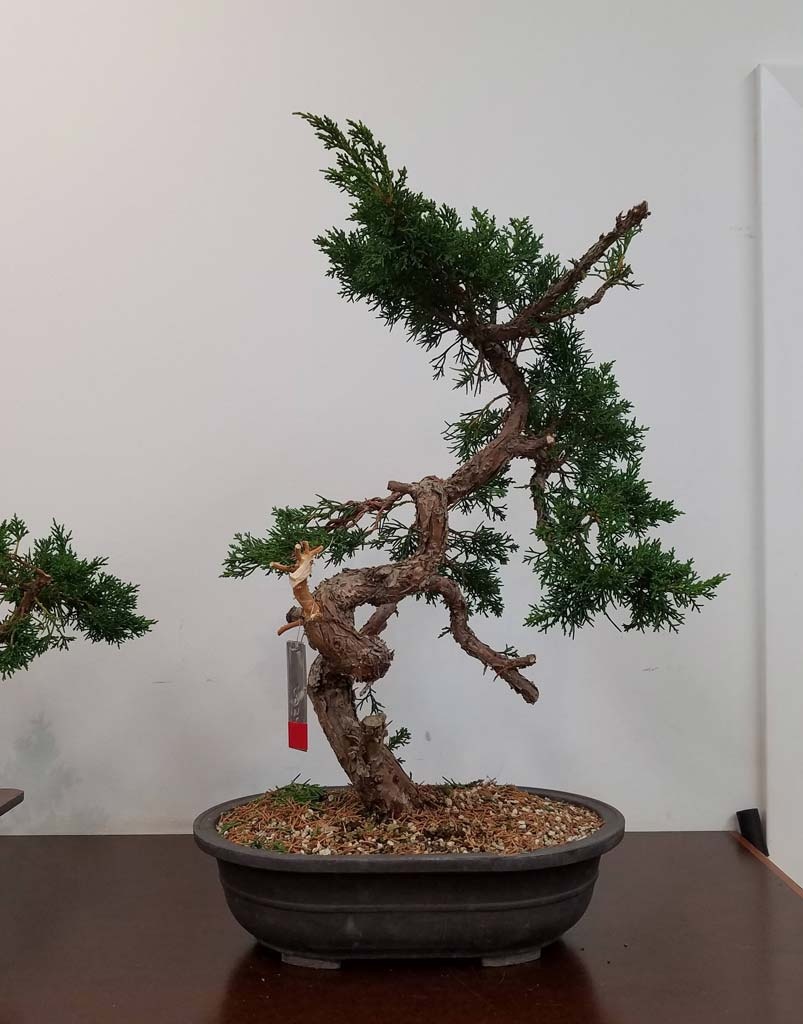