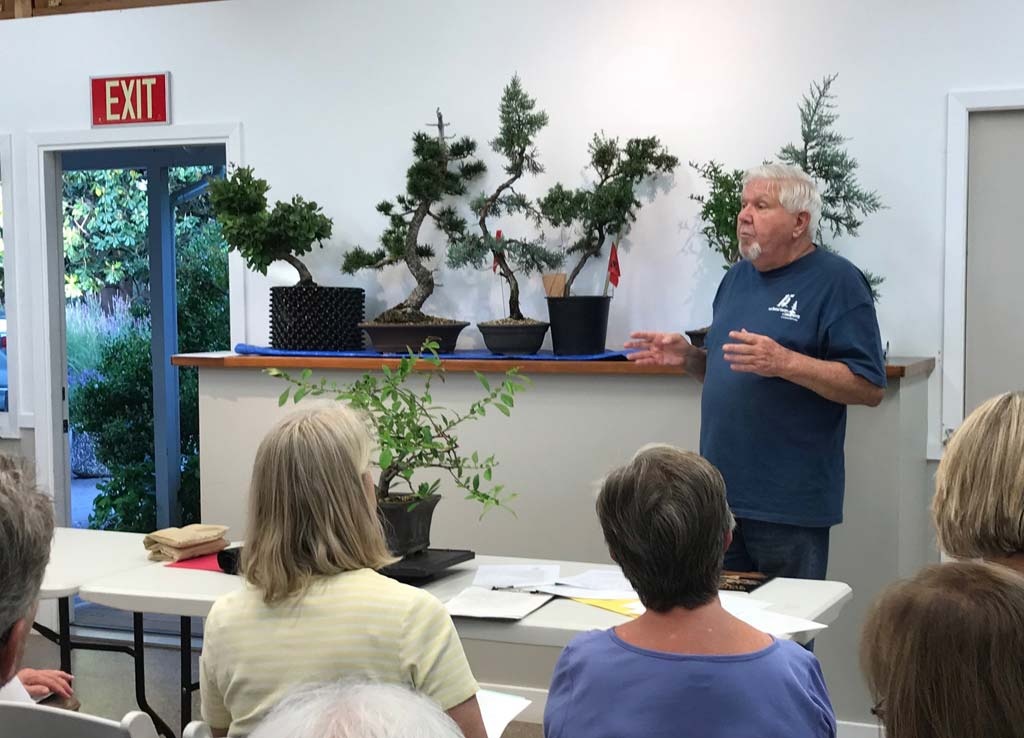 Our club president, George Haas presented an excellent program on the art of collecting bonsai at our June meeting. This is a topic which has not been covered by any area bonsai club within recent memory, so most of the material presented was eye-opening for members. While many bonsai enthusiasts would not venture to the mountains collecting trees in the High Sierra, George’s description of the perils and rewards of collecting gave us all a heightened appreciation for these bonsai. And for those looking for bonsai closer to home George had plenty of tips that applied to urban and suburban collecting as well, something many of us can do in our own backyards. 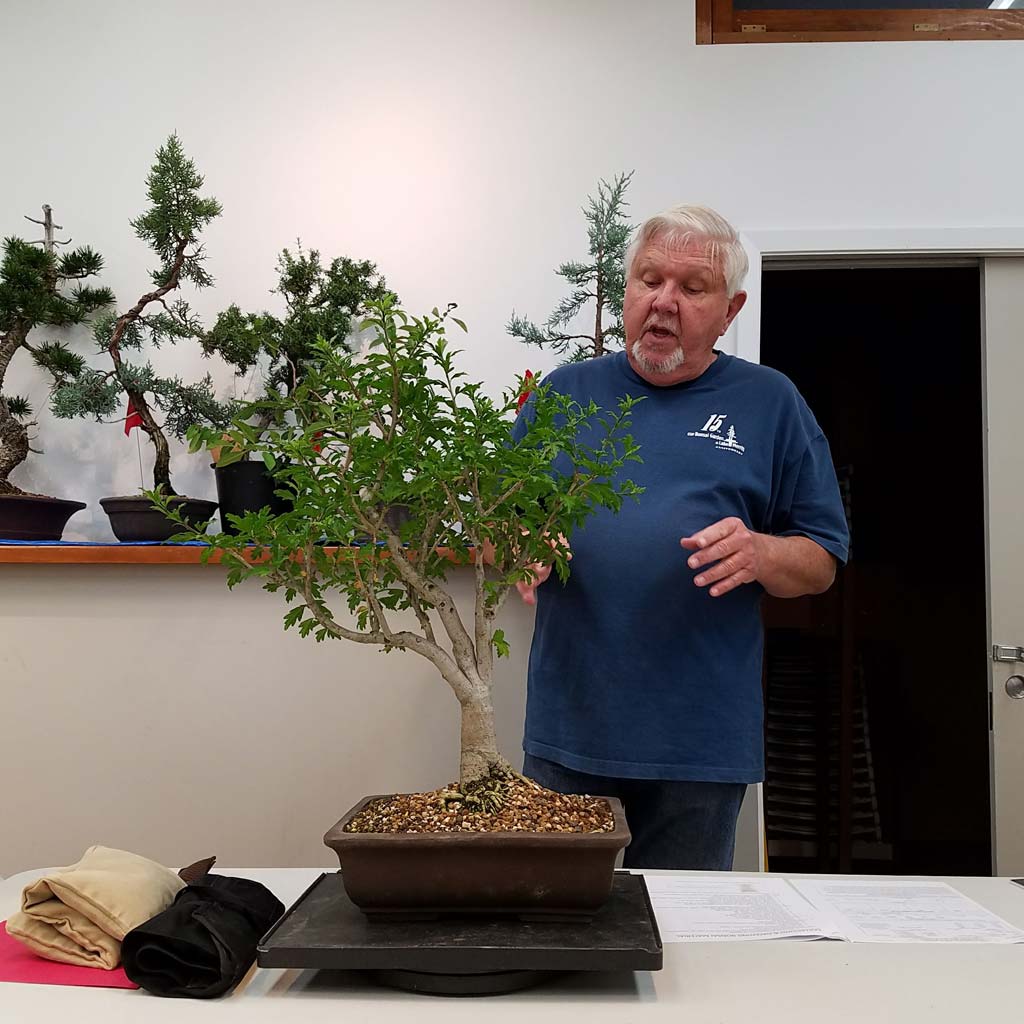 Before launching into the details of collecting George emphasized the importance of ethical collecting. It might seem like a good way to jump-start your bonsai collection with trees that are decades or even centuries old and have intriguing deadwood features, but there is a right way to collect, and many wrong ways. Unfortunately with the growing popularity of bonsai more bad behavior has been observed: collectors not getting permission from property owners, or permits from government agencies to collect, collectors digging only part of the tree from the ground and giving up – not filling the hole back in so the tree can live, trying to collect too large a tree and not preserving enough of the roots and foliage to allow it to survive, leaving trash and debris behind. Whether you are collecting two hundred year old Sierra junipers or your neighbor’s boxwood hedges George enumerated the many steps of successful collecting. 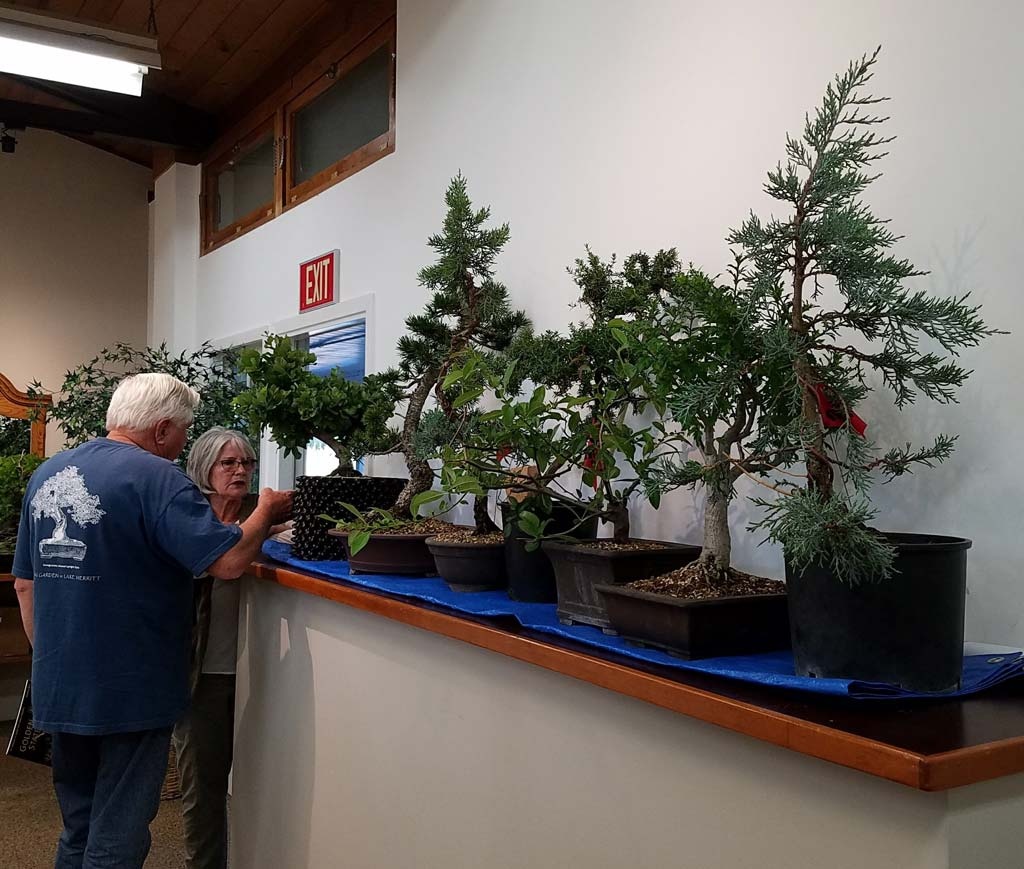 It was evident from George’s “Check List for Collecting” hand-out that collecting is serious business. When you are bringing backpacks, crowbars, loppers, axes and even a Sawzall you know you are in for a workout getting your prize out of the ground and back home. Besides packing enough water, which is good advice no matter what you are doing, George also suggested thick leather gloves, and most importantly a good snack. His detailed instructions included how to dig a trench around a tree, finding and cutting the tap root, protecting the root ball, and after-care once it is home. He suggested soaking the tree in water to thoroughly hydrate it, then within 24 hours getting it into a container of sieved horticultural pumice. The tree must be wired securely to the container to avoid damage to roots and then left to rest in morning sun and afternoon shade. The trees will need very little water at this point, but a good misting will prevent drying. Rotate the tree once a month to even out the growth and check for pests and disease frequently. Trees require at least a year, or five, to adjust to their new environment, so don’t make the mistake of rushing to style the tree. This is a sure-fire way to kill it, wasting the time and effort you have invested. 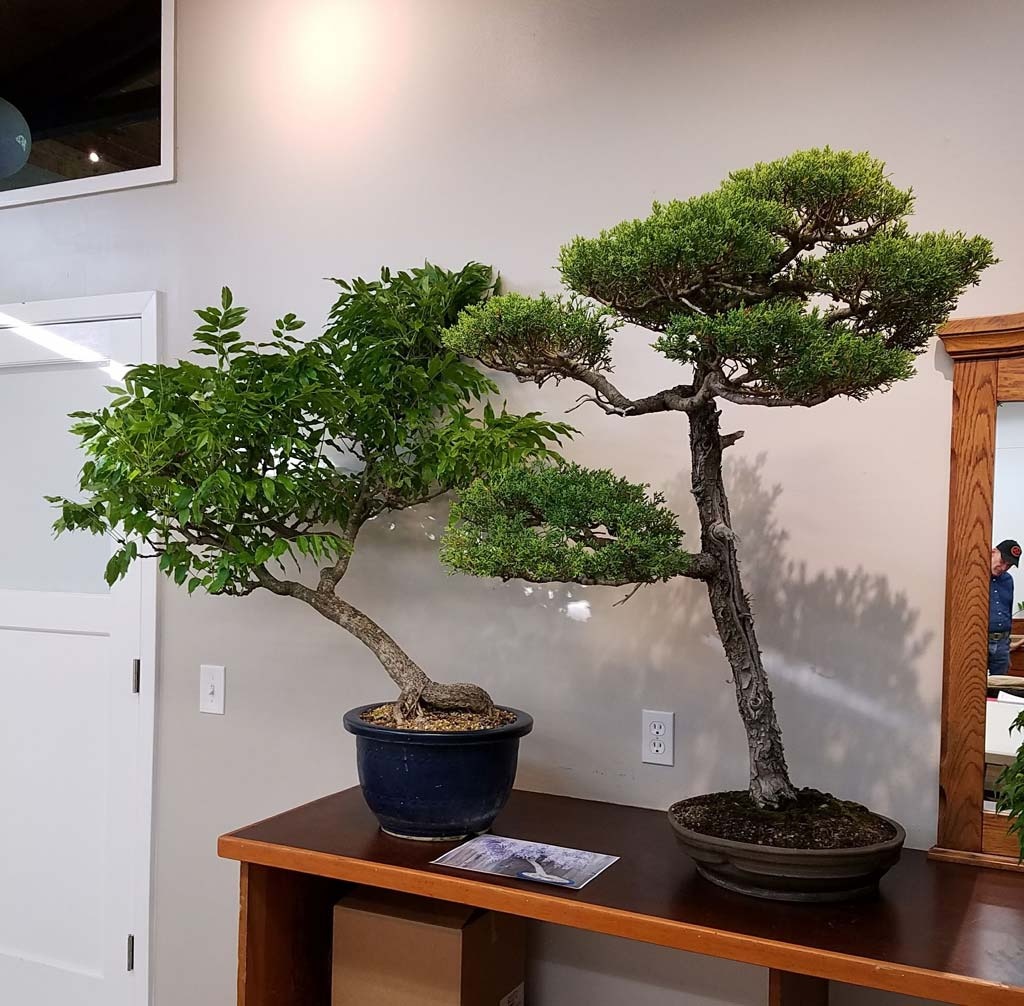 George brought for the presentation a group of trees that, one way or another, had been rescued from the landfill, scavenged from the landscape, or, in one case that sounded particularly interesting, ‘liberated’ from his sister-in-law’s yard. These naturally grown trees, called yamadori by the Japanese, have certain advantages over field grown bonsai in that they are usually larger, older and often show the distress of weather and abuse, making them more interesting. There are also disadvantages to collecting; the sometimes slow and laborious process of ground removal, root care, potting up for recovery and initial strength, eventual repotting, and possibly extensive root work. George emphasized that any tree that has been grown from the beginning in a container will have different characteristics than one that has been subjected to natural forces and cycles outdoors, and that the farther afield one goes into the natural world the more likely it is that the material found will be a native species which has “naturalized” to visibly reflect its lifespan. Some of the handsome trees he presented were purchased from others who knew where and when they had been dug up, some he had collected himself, and one or two were of unknown origin but obviously wild-grown. George pointed out that the story of a tree’s origin becomes part of its provenance, which enhances its interest and increases its value. 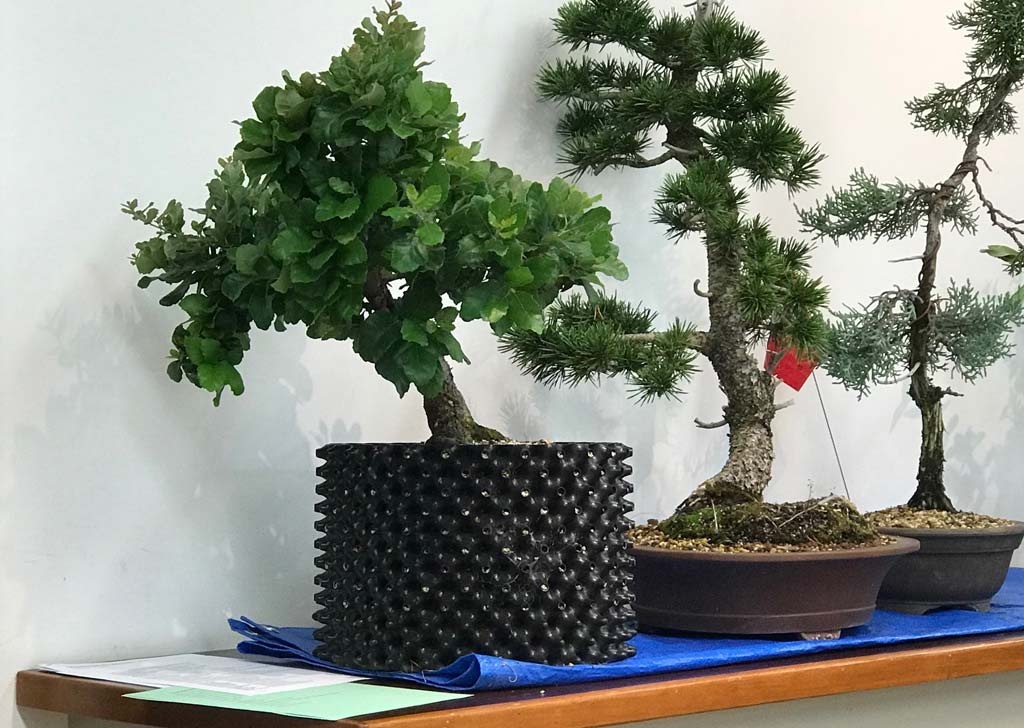 One lasting impression for some attendees was the fascinating container George used for one of his trees. Black plastic punctured with dozens of conical holes made for an odd looking new growing pot that is particularly good for collected trees. When roots reach the outer edges of the pot they meet the air from the holes which stops their growth to the sides and directs it downward where it is more useful. The container looked like a large black, particularly prickly pineapple, but may have been the hit of a very educational and entertaining demonstration. Thank you George! 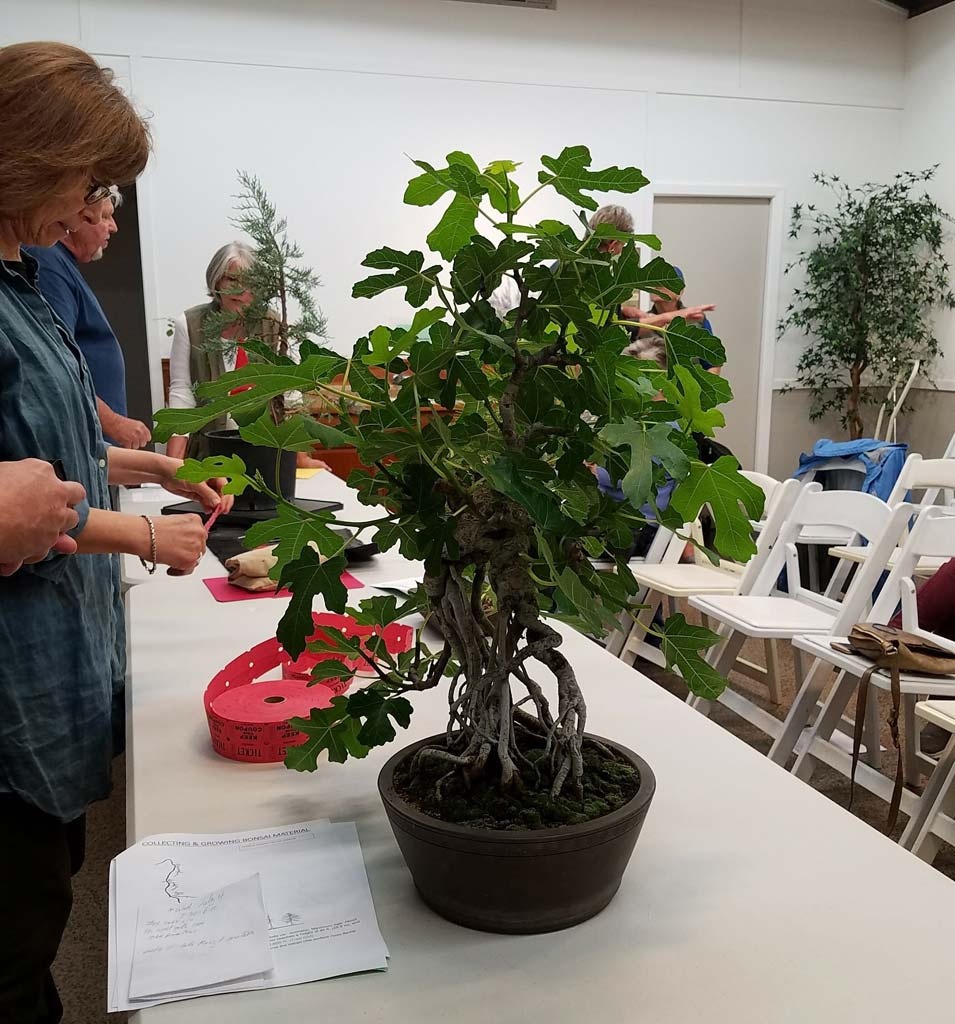 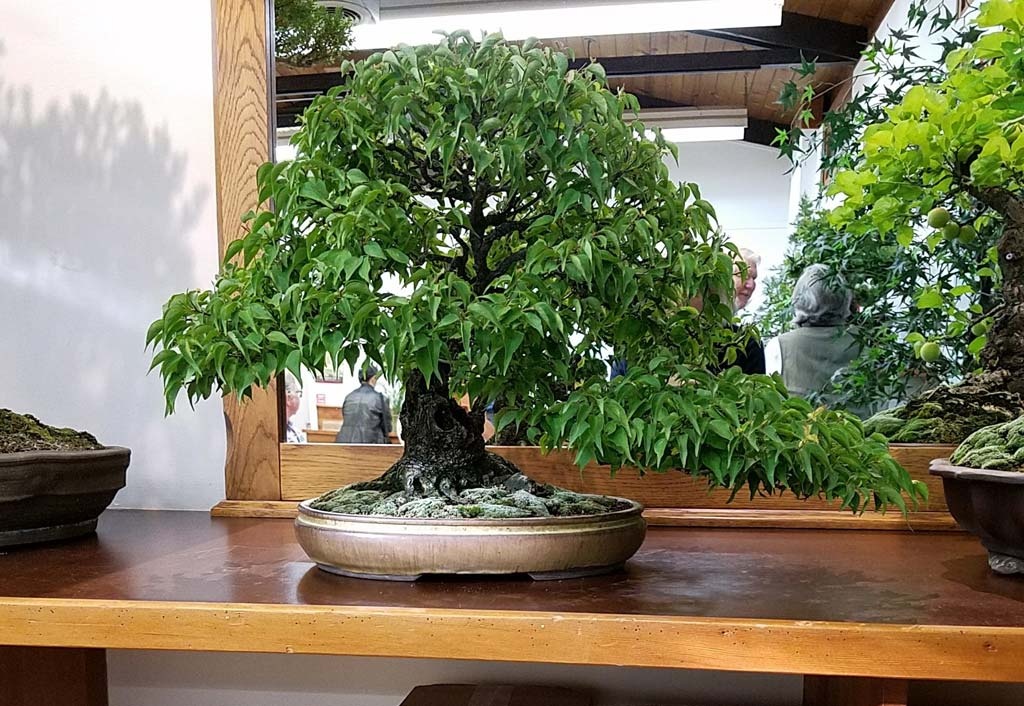