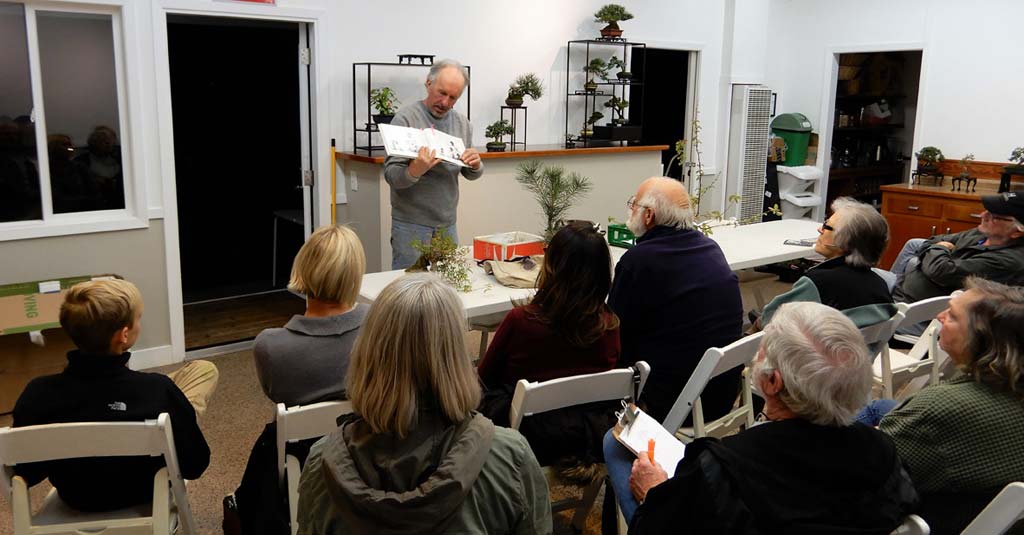 Shohin bonsai was the topic in March when Bill Castellon, an accomplished bonsai artist who used to conduct shohin workshops for our club once upon a time, gave us a highly informative lecture and demonstration on the topic of these smallest of our small trees. Clearly an extremely knowledgeable artist and horticulturalist, Bill was able to discuss a wide variety of bonsai topics in addition to shohin as he introduced us to and proceeded to transform a Chinese quince, which was raffled off at the end of the night. As a bonus, he also discussed and raffled off a black pine.

Bill began the evening with some general guidelines for shohin, then spent 30 minutes discussing some of the key points to be considered when displaying them. He pointed out that while shohin are typically defined as small trees under 20 centimeters (approximately eight inches) in height, with smaller pots than regular bonsai, simple definitions are often inadequate — a common problem in bonsai, it seems. You cannot chop all but the bottom eight inches from a larger bonsai and call it a shohin any more than you can put a shrub in a pot and call it bonsai. In addition to the subtle qualities that define bonsai, there are certain stylistic nuances unique to shohin. And Bill was there to show us a few development techniques adapted specifically to coax our trees into convincing depictions of old trees that can fit in one of our hands. 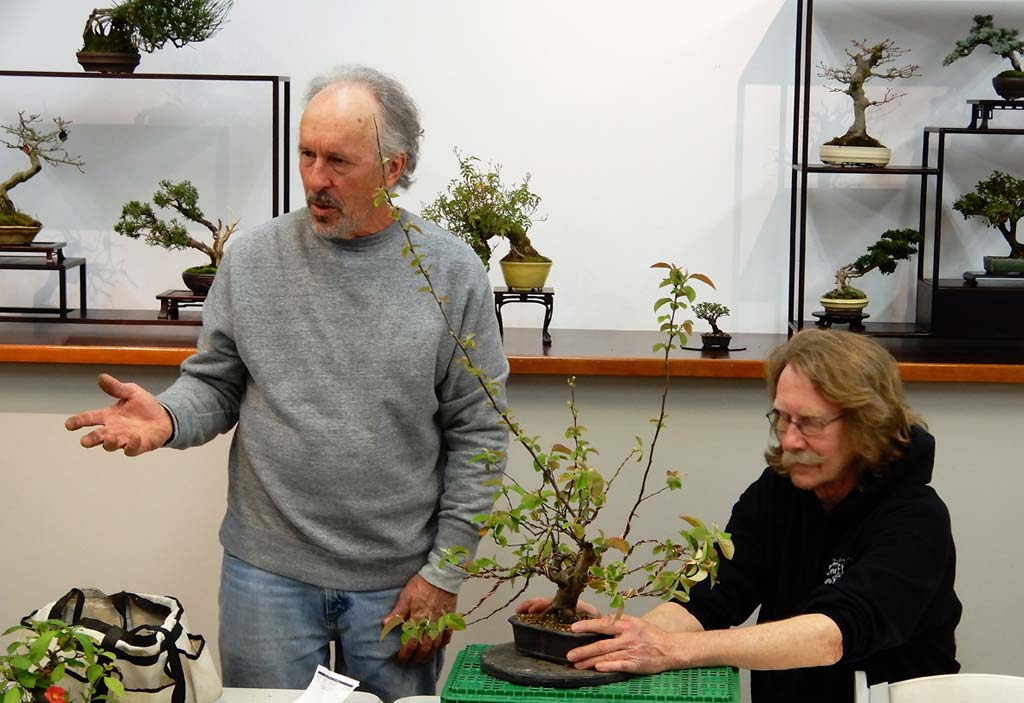 The classic shohin setup for a Japanese bonsai show — Kokufu being the gold standard of shows — is to have a multi-compartment box-stand containing several trees, along with an accent plant and a companion or supporting tree that are placed off to one side of the box-stand. Applying the triangular ideal to plan the layout, one should place the strongest trees so that they occupy the corners of the triangle. Along with numerous trees he brought with him, Bill used his own stands, props, and photographs from Kokufu show books to illustrate these and several other points relevant to showing shohin trees.

Certainly putting a tree in a smaller pot will make the tree look bigger, but there are other more organizational considerations to be made, such as the mix of colors and styles of the pots utilized within the display, or the representation of various seasons, both strong thematic tools for making an artistic statement. Bill also demonstrated how important it is to consider the flow of the individual trees’ movement, orienting the trees so that they all work in concert to keep the viewer’s attention centered on the display. 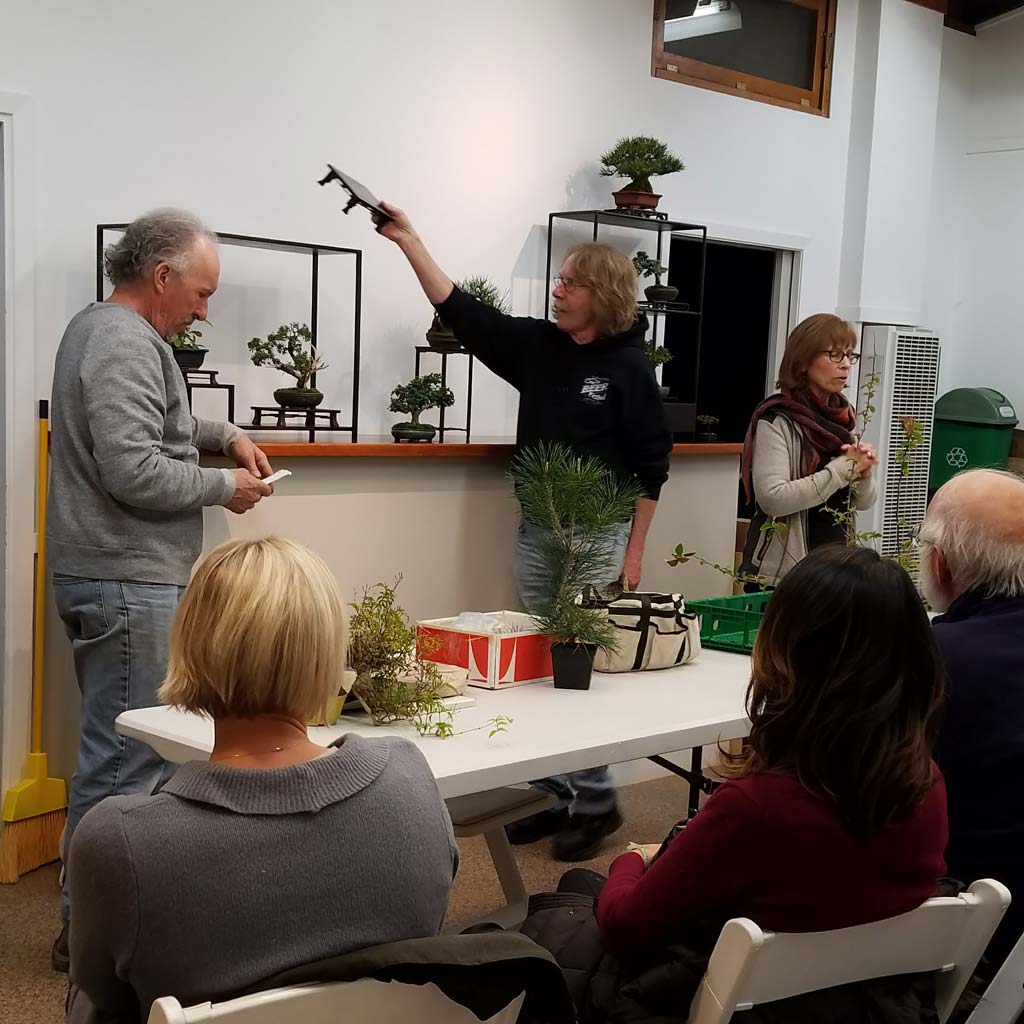 To kick off the demo portion of the night, Bill turned to a black pine that was looking a bit top heavy, because it was toward the end of its current trunk-thickening top-growth cycle. Bill used the pine to illustrate his trick for creating a shohin pine tree: At the seedling stage, you have to let the tree’s initial branches grow, as well as the apex. At the early stages, all of these growth points will contribute to a rapidly thickening trunk. With careful timing, you eventually chop the top off, before the tree abandons the bottom branches and they die off, but not before getting as much rapid growth as possible. In a move we have seen many times before, after the apex is removed, one of the branches is made the new apex and some of the others are removed. Thinning the branches reduces the chance of reverse taper due to bulging. This apex-replacement-after-running process is repeated many times over the course of a few years to fatten the trunk substantially in a minimal amount of time.

Bill thinned some of the side branches on the pine of the night and reduced the top a bit. He also chose a new apex from among the side branches, but left it to the lucky raffle winner to make the change a little later. To wrap up his work on the pine, Bill took a few candles off, too. Many things we have learned from Jonas Dupuich and Peter Tea in past lectures became relevant while Bill was talking about this little pine’s development. The whole demo almost derailed into a discussion of pines as old members compared technique differences and new members were brought up to speed a bit, but Bill deftly brought everything back on track. 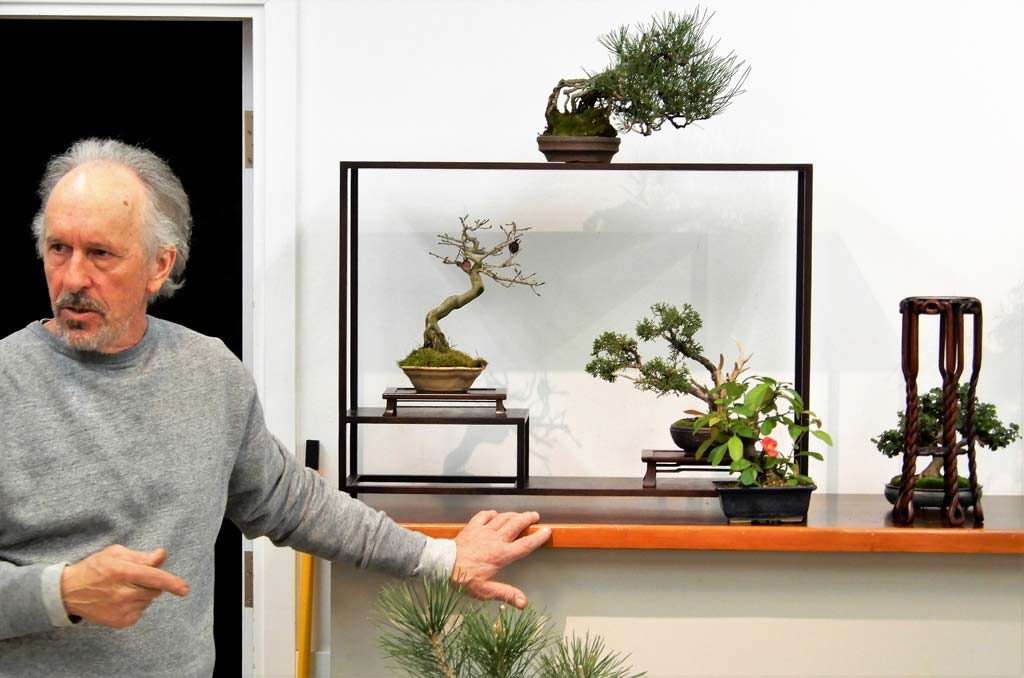 Bill turned his attention to the Chinese quince next, calling the species “one of the favored bonsai in Japan.” Apparently, Chinese quinces are a little better than Japanese quinces because they grow more like trees, whereas Japanese quinces try to become shrubs. Bill brought this one prewired, then started bending the branches in front of us. He also started to cut back the branches, saying more of the same may be done next year.

With two such beautiful creations on the line, raffle ticket sales were brisk this night. Craig Thompson won the raffle for the pine, but in a show of support to budding new bonsai enthusiasts, gave it to one of our newest members Marcus Mieritz, who was very excited to receive such an impressive specimen. Dan Keller won the quince. 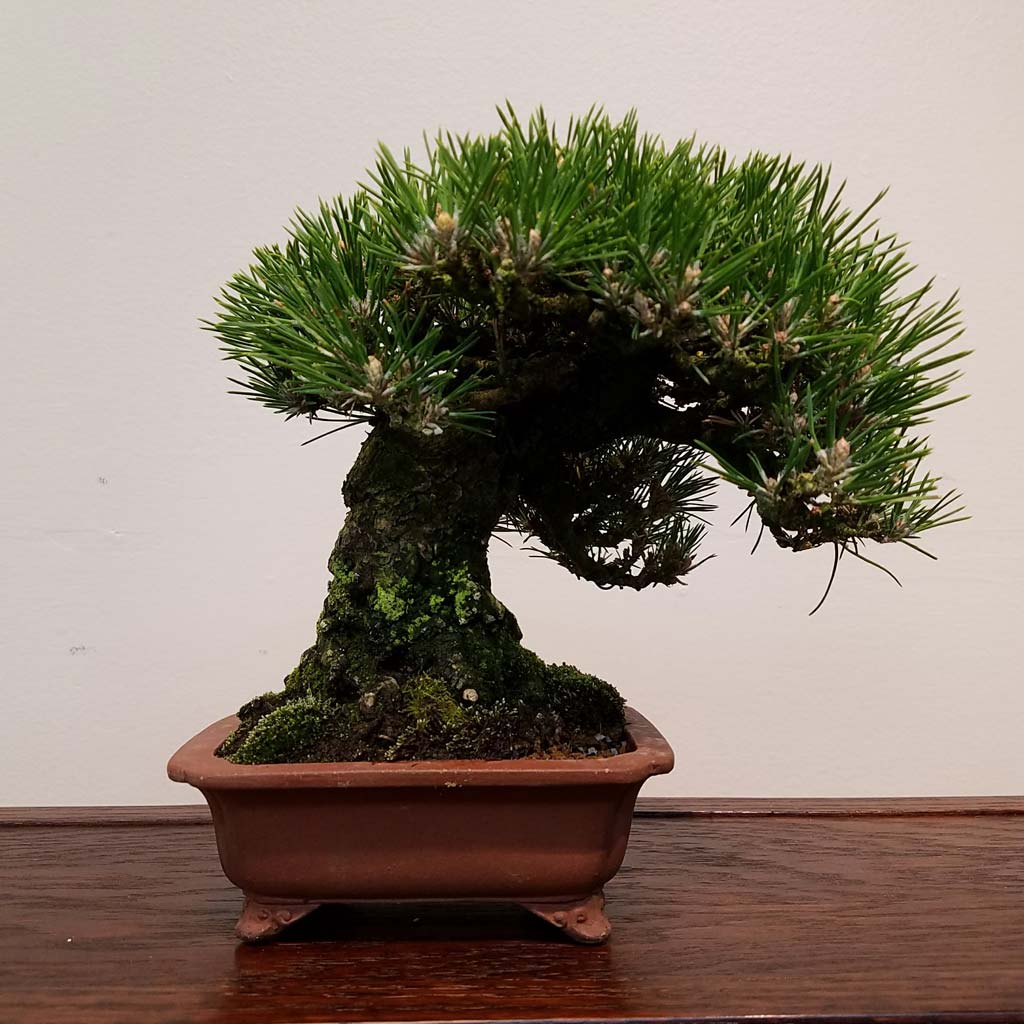 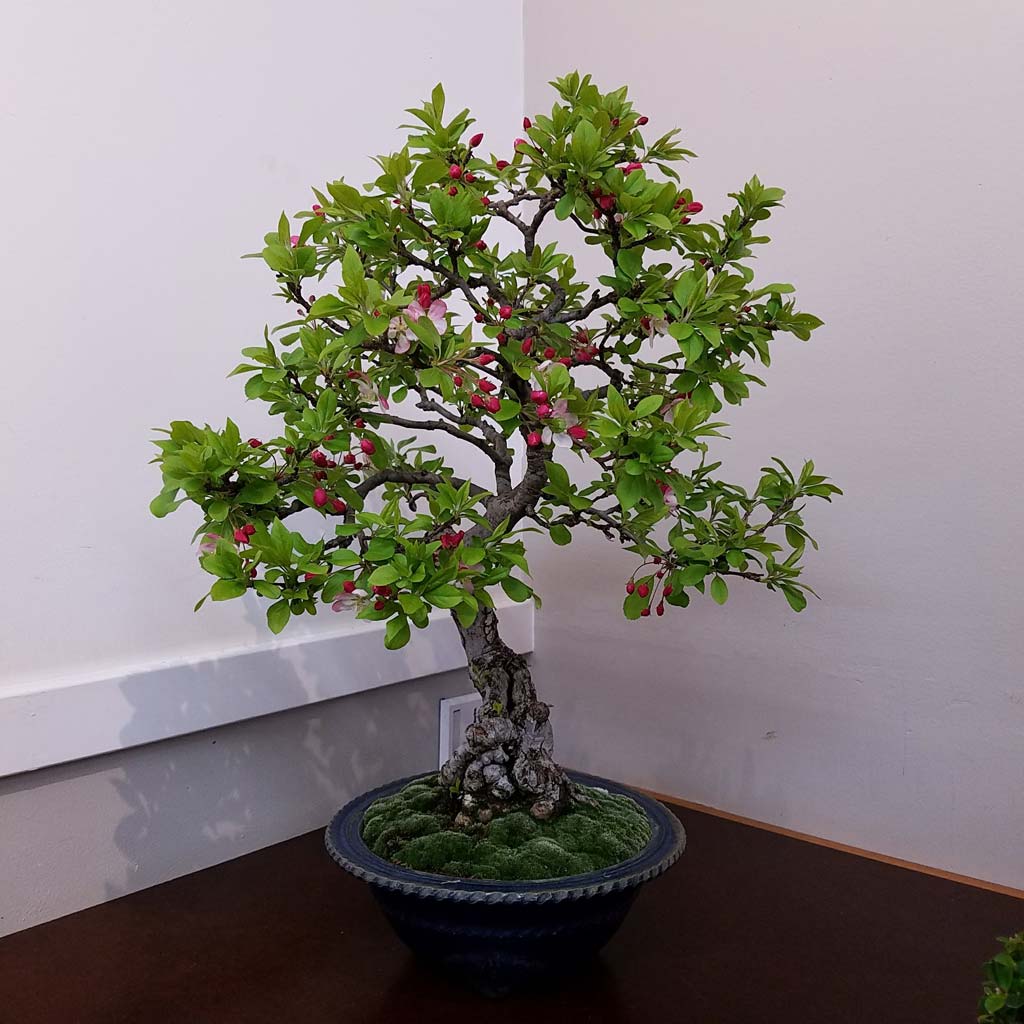 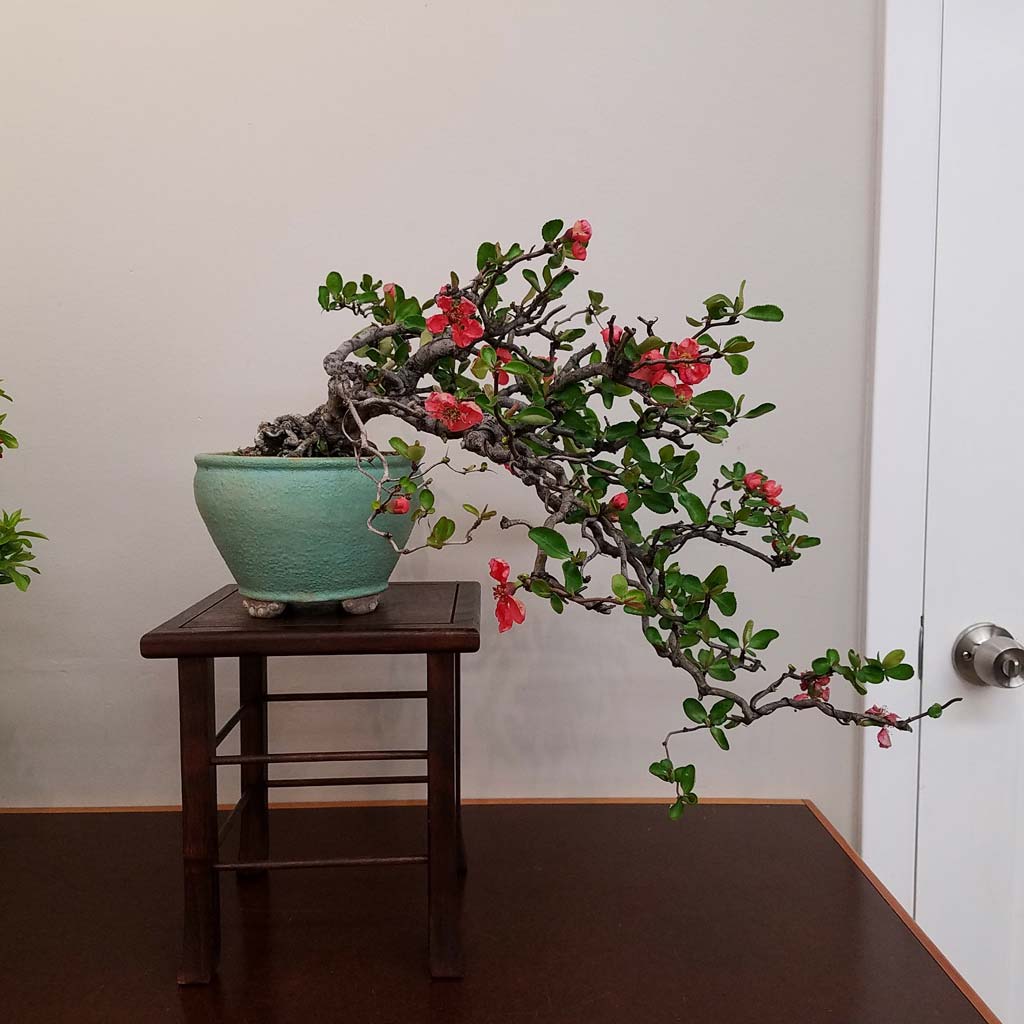