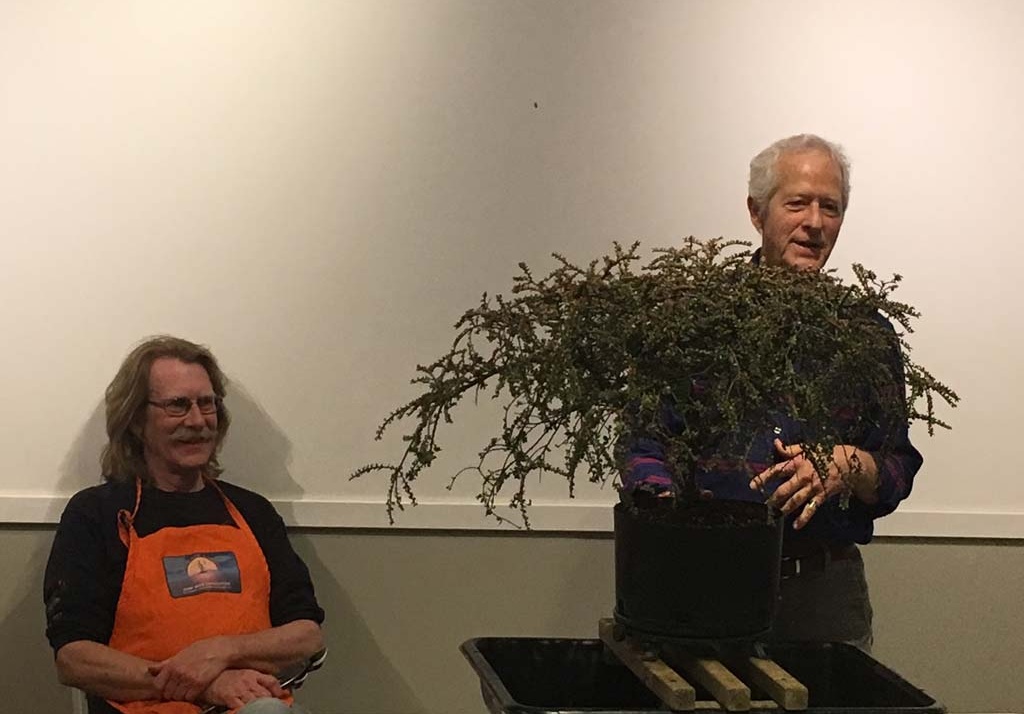 The doldrums of this April’s showers were broken by the antics of our club’s own favorite bonsai duo, Chris Ross and John Doig. In their usual style where Chris does most of the talking and John does all the work, the pair brought form and energy to an otherwise common cotoneaster and smiles to the faces in the packed audience.

With his opening volley, Chris jumped right into his well-known banter about what makes a bonsai. He mentioned “emphasizing the vagaries of nature” and called the goal in bonsai “what a tree could be if it went to tree college.” Meanwhile, John, who had been in the background hungrily fondling tools, busted in at this last comment, eager to get chopping on the bushy cotoneaster before them. 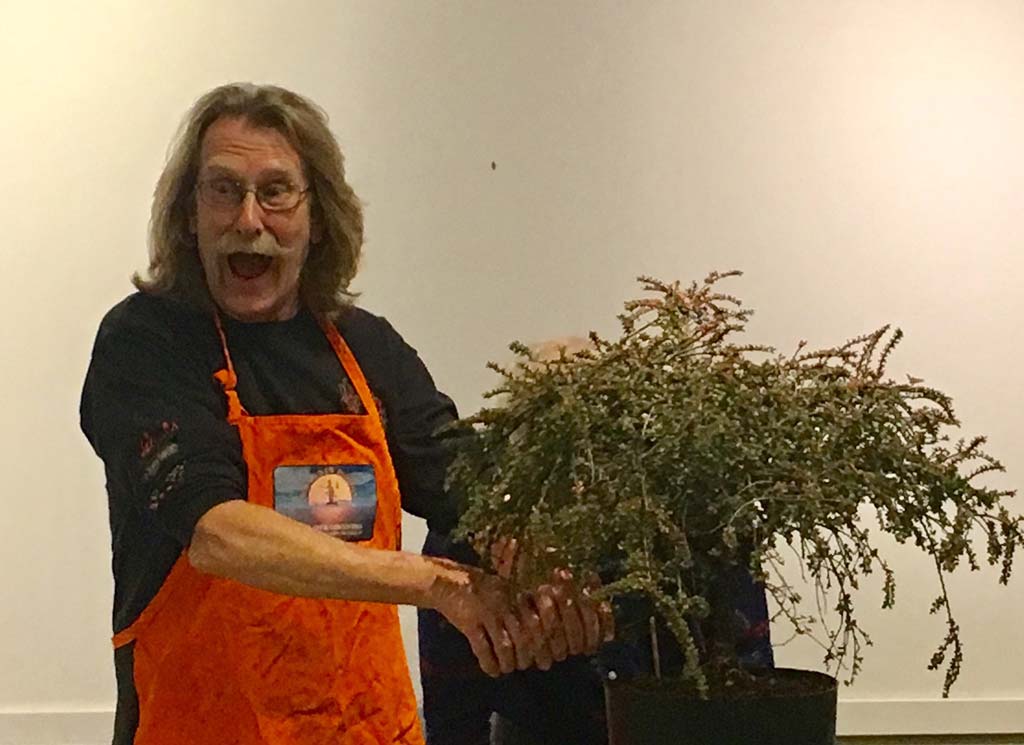 A few notes about the subject matter: This cotoneaster came from John’s favorite, “secret” landscaping tree source, so it had been raised so far in its life to become a shrub, hedge, or some other large-scale plant. As is, it was a sturdy, bushy, even attractive little shrub, but a clear path to a bonsai it had not. But after caring for it for a few months on his property, and some prior consultation with Chris, John had a reasonable idea where he was going to take this tree’s bonsai potential. The trunk quickly split into two, and branches of various sizes, some appropriate and others not so much for their locations, were copious all over the tree.

John was so eager to cut some obvious inappropriately located branches off that he had to be interrupted by Morris Dailey, who asked, “What about choosing the front?” Although they explained that there is just so much that is crying for removal from this tree that it’s not important just yet, Chris and John nodded to tradition and stopped what they were doing to go about selecting the front for the tree. There was some disagreement in the audience, but one side was chosen as the front, with a nearly opposite location indicated for secondary consideration once some of the clear-cutting could be done. 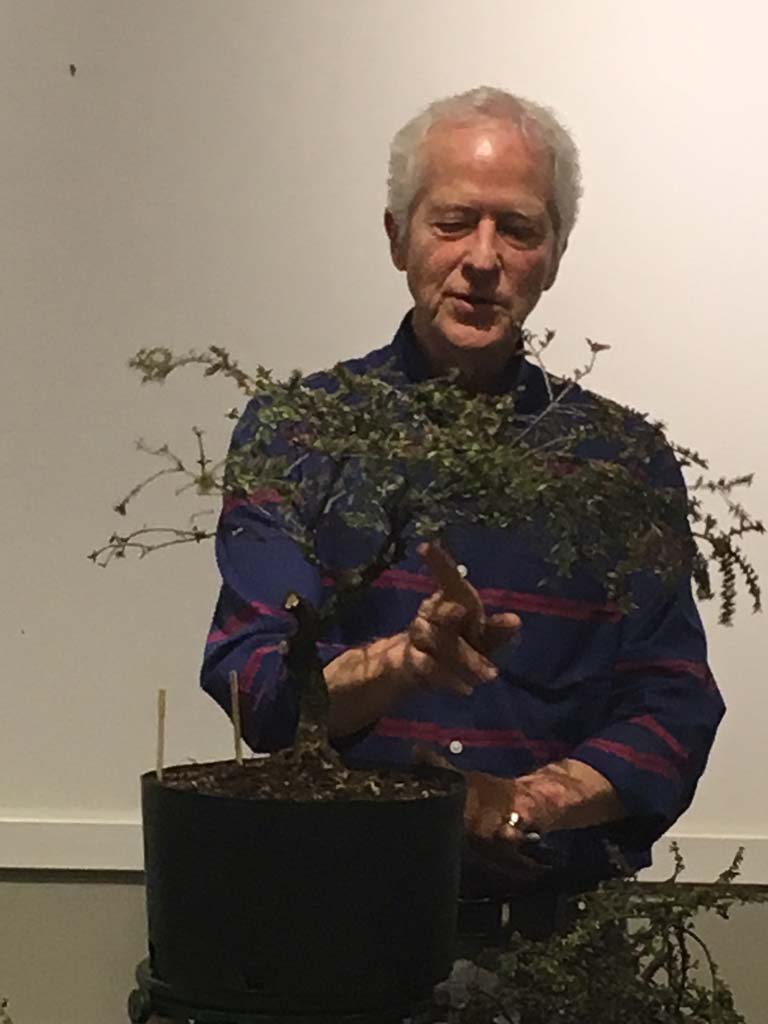 With the formalities aside, John proceeded to lop off two substantial branches. The first was too twisty throughout the tree, the other was puny compared to branches above it and would never catch up, no matter how much the branches above it were to be pruned. Then a small branch was cut from among some larger ones and Dan Keller took issue with that decision. The gist of his argument was: why take that weak branch and leave so many strong branches that might contribute to a lump or “knuckle,” some early signs of which were already beginning to show? John was so intent on what he was doing, working fluidly, that you could see on his face for a split second that he wasn’t sure of the answer. But that was just his rational mind catching up with his creative flow. After taking a moment, he (partly through Chris, who at times feels like John’s interpreter) explained that more would ultimately be done with that area and that any strong branches left over would be wired in such a way that they would contribute more to the overall shape than detract from the specific branch from which they were growing. Chris also explained the many small, vertical branches that were being left all over the tree, saying that they were being left in case they need to replace the overly long branches from which they are back-budding. At some point, John said something to the effect of “Yeah — that,” and returned to the work he loves and does so well. 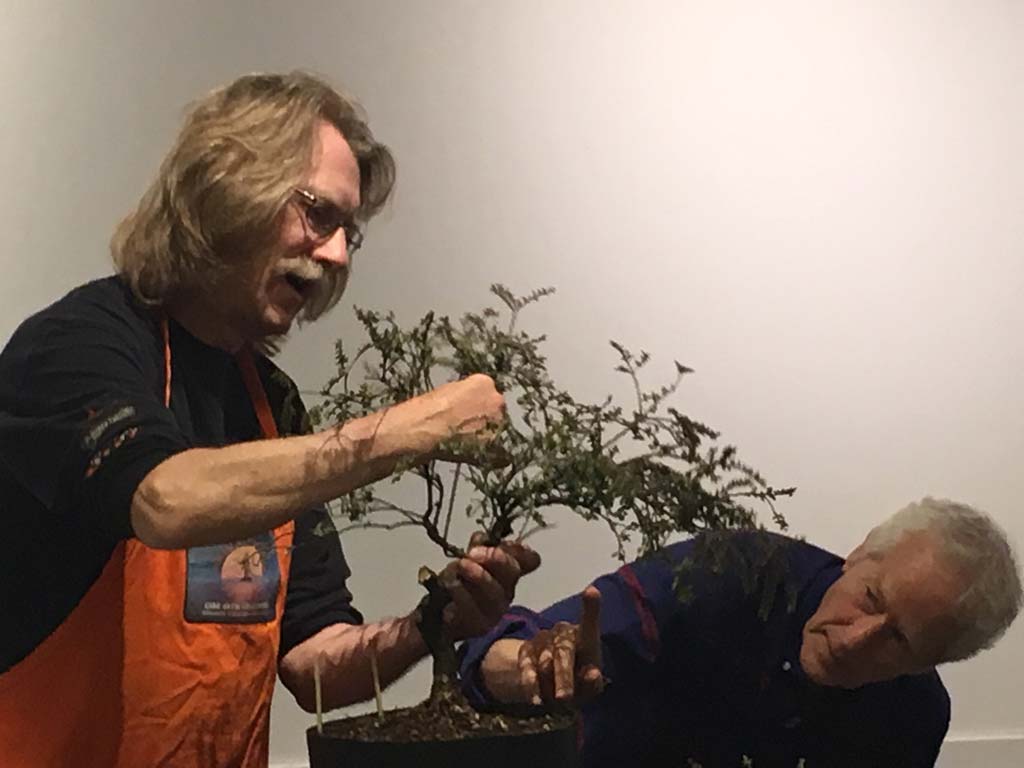 It wasn’t long after this that audience members began to suspect that the chosen front was no longer appropriate. The main clue: the biggest branches there were pretty much all gone, leaving an unsightly empty area nothing like what is usually left as an inviting opening in a good bonsai front. By the intermission, John had cut off everything but one main trunk. The last branch that might have been paired with the main trunk was cut off and turned into a jin. Then the wiring began. 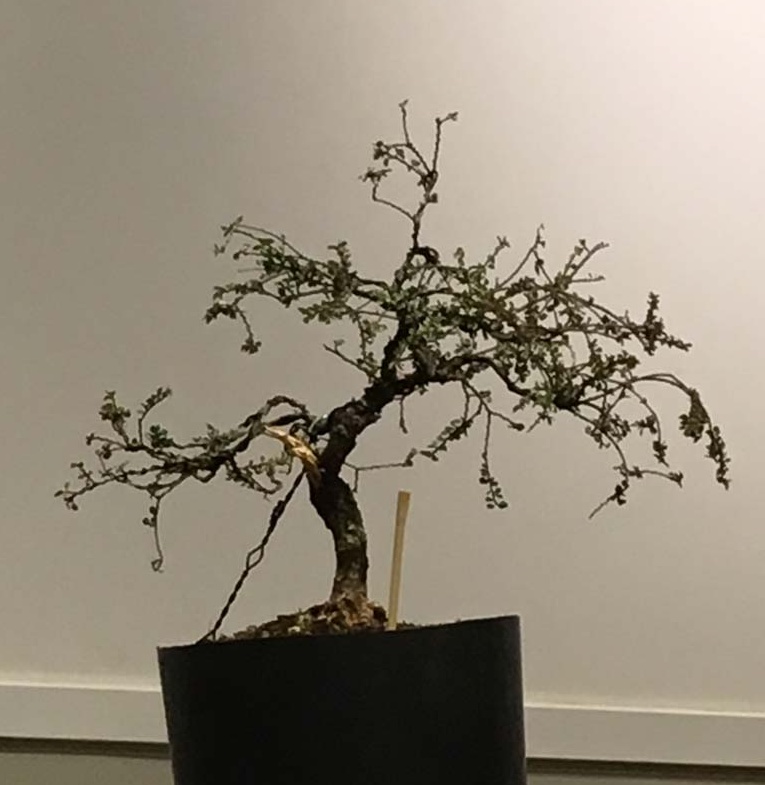 Candace Key asked if the pruning wounds will heal quickly on this tree. Chris said, “yes,” mainly because the bark is so coarse and knobby. Some of the trees he mentioned that don’t heal wounds well: Ginkgo, Fig, Camellia. 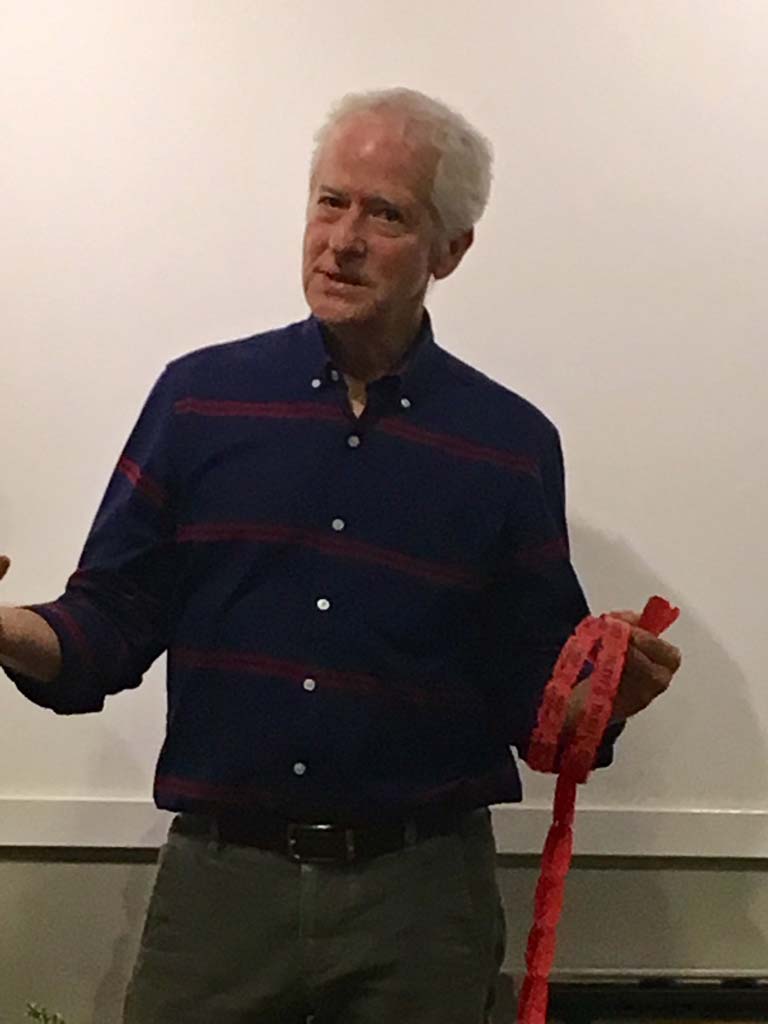 Chris talked briefly at the end about the potential for cutting all the long branches, either midway or all the way at the base of the branches, to encourage buds further back. The final decision for the night was to keep most of the branches because there was too large a degree of uncertainty as to how this particular cultivar would react to deep cutting. However, all of the growth tips were cut off to discourage branch elongation. 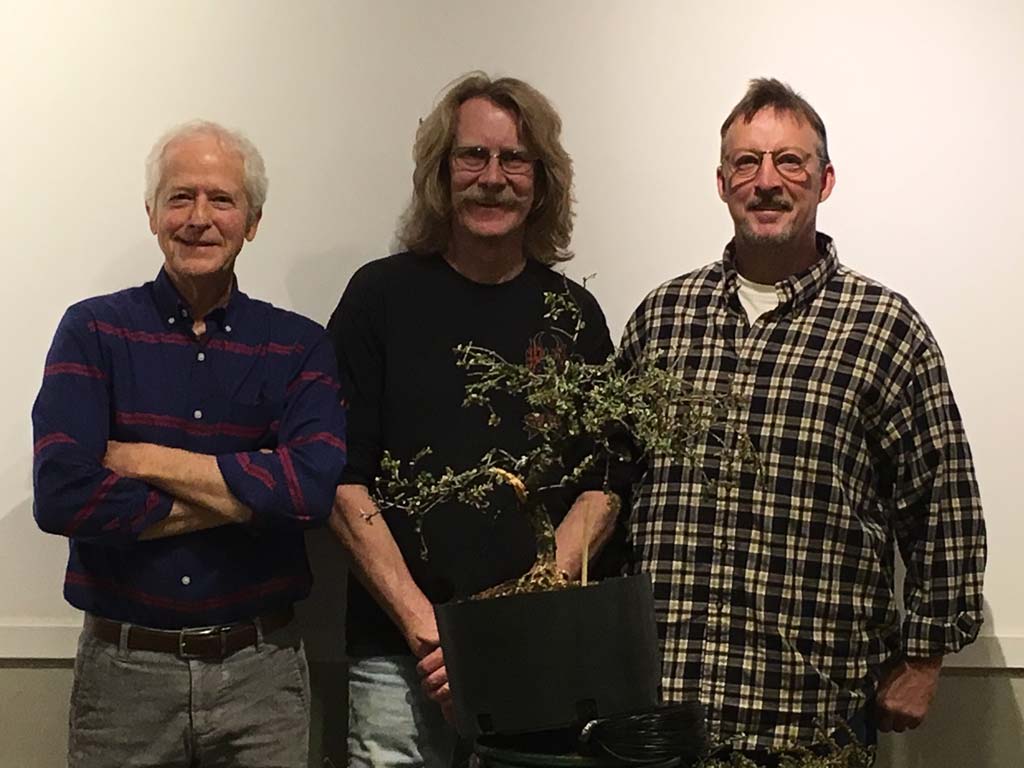 The lucky winner of the beautiful final product was James Phelan. Congratulations, James! We look forward to seeing that tree’s progress at future workshops.